YOU ARE HERE : VMI Group > VMI donates EUR 160,000 to support the Ukrainian refugees 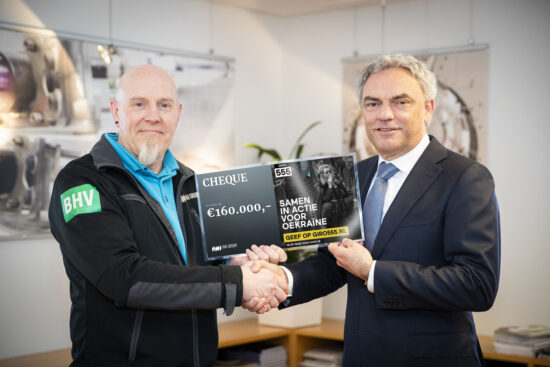 In a special fundraising action, VMI and its employees have collectively donated EUR 160,000 to “Giro 555”, which is the Dutch part of the global Emergency Appeals Alliance. The donation will be used to provide practical support to the Ukrainian people and those affected by the conflict.

The fundraising is part of the contribution that VMI has made globally to provide help to the refugees. Particularly, VMI Poland has actively been involved in giving food and shelter.

During a small ceremony held in the headquarters of VMI in Holland, Michael Oosterhuis of the Works Council handed over a cheque representing the amount to Harm Voortman, CEO of the VMI Group.

Harm Voortman: “We are very proud of the efforts of the VMI family to support the refugees in this unprecedented crisis. We sincerely hope that our contribution to the Emergency Appeals Alliance will directly help the Ukrainian people. Our thoughts go out to all the people affected in the area.”