YOU ARE HERE : VMI Group > Growing Together: 25 years of VMI in China

Growing Together: 25 years of VMI in China 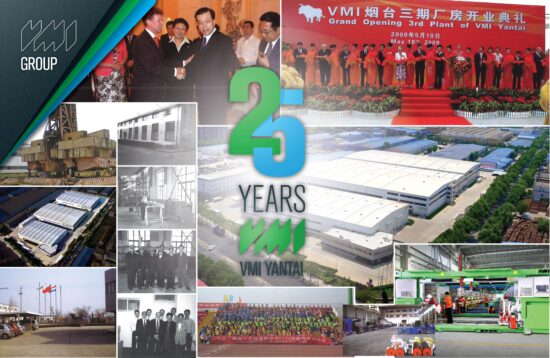 Driver for change in China

The past 25 years have seen extraordinary change in the Chinese tire industry- and VMI has been at the heart of it.

At the start of the millennium Chinese companies were little known outside the country, while today many of them are established international players, with a strong global presence and rapidly increasing name recognition. The whole Chinese tire industry has come a long way in a short time, and that progress has been achieved to an extraordinary extent by using VMI technology.

From agency sales to full-scale commitment.

VMI first introduced its products to China in the late 1980s, with sales in those early days managed through an agent based in Hong Kong. The Chinese economy was changing fast at the time, with the tire and automotive sectors moving faster than most, due to the historic change from cross-ply tires to radial. VMI first sold a single stage machine to a Chinese company in 1994, and this proved to be an immediate success. That’s when we decided the time was right to make a full-scale commitment to China, opening our first plant on March 25th 1996 in Yantai.

By establishing a manufacturing centre in Yantai for best-in-class machines, VMI made it easier for ambitious Chinese tire companies to access reliable equipment that met the highest international quality standards but was also made in China. This helped customers raise their own productivity and quality standards, setting them on the road to rapid growth. It also helped to undermine the culture of technology copying, which has always been a problem in many Chinese industries.

Growth and development really started to accelerate in 2006, when VMI introduced its new breed of single-stage, semi-automated machines, the 242 series, which were manufactured in Yantai from 2009 and proved an instant success in the Chinese market.

Yet the most dramatic change came in 2013, when VMI introduced the EXXIUM fully-automated single-stage machine into China, followed by the VAST truck tire machine in 2015. This new technology from VMI drove unprecedented improvements in productivity and quality, and has accelerated transformation of the whole industry.

At home in China

Today, VMI makes some of the most advanced machines in the world tire industry in Yantai.

The story of VMI Yantai is one of continuous growth and enhanced technology transfer. Automated tire-building machines, bead apex, cutters, batch-offs: they are all built here, sometimes using components from Europe but increasingly they are manufactured here end to end. The Yantai facility is one of the most modern in the world tire industry, and it includes automated systems, robotic welding, advanced CNC machines and a quality system that compares with best practice anywhere in the world. Senior leadership is entirely Chinese, and so are almost all production personnel.

VMI Yantai is a Chinese company, registered in China and paying its taxes there, as well. Unlike many foreign businesses, VMI made a strong commitment to China and has become part of the industry’s fabric. The Chinese tire industry has been a major success story. It is very unlikely that Chinese companies could have progressed as far and fast, nor have grown and prospered as they have done without the vital contribution made by VMI.

The big question today is this: what will the next 25 years bring?

Making predictions is a dangerous game but it can also be interesting. Here is what we expect to happen from now on.

Chinese companies will drive innovation. The automotive (and therefore tire) industry will be transformed by growing convergence between AI, smart city systems, autonomous vehicles and communication technologies. Chinese institutions and businesses are leaders in many of these, and this is likely to help Chinese tire manufacturers become even more competitive.

VMI will continue to invest in China. Yantai has moved from being an assembly centre to a true production facility, and this has worked well, not just for Chinese customers but for VMI’s wider business. We want to see this continue for as long as possible.

Intellectual Property (IP) will be more vital than ever. The speed of technology change is increasing and that means both developing and protecting IP is becoming more important. Traditionally this has been a problem in China, where copying remains too common. There are signs that the Chinese legal system is moving to protect IP more strongly, as Chinese companies become stronger innovators themselves. We hope this trend will also continue.

When VMI opened for business in Yantai, the Chinese tire industry was at an early stage of development. Progress in the past 25 years has been extraordinary, and we are very proud of VMI’s contribution to this success story. China is one of the most attractive growth markets in the world, and VMI is committed to making the next 25 years in China even better than the first.